Screenshots from an elegiac film about the previous amir of the Tehrik-i Taliban Pakistan (TTP), Mawlana Fazlullah, who was killed by a U.S. drone in June 2018. Fazlullah is shown speaking to TTP members and locals, firing weapons, leading congregational prayers, offering supplicatory prayer (du’a), meeting with other TTP leaders, and preparing for ‘Eid al-Adha.

Fazlullah pledges allegiance (bay’a) to the leadership of the Afghan Taliban (Islamic Emirate of Afghanistan).

On January 15, a UK citizen, Malik Faisal Akram, took four people hostage in the Congregation Beth Israel Synagogue in Colleyville, Texas. The gunman, who was ultimately shot and killed in a standoff with police, had previously been investigated in 2020 by British domestic intelligence, MI5, which reportedly concluded he was not a threat. Staff at the Islamic Center of Irving in Texas reported that Akram became angry when his request to spend the night at the center was refused. The center’s staff say they escorted him out and he left after this. U.S. law enforcement agencies are still investigating Akram’s activities and timeline for unaccounted days in the U.S. as well as possible connections in the UK. This includes how he was able to obtain the handgun used in his attack.

Akram’s motivations remain unclear and still being investigated. His reported linking of his attack to the release of Aafia Siddiqui, who is currently imprisoned serving an 86-year federal term in Texas after being convicted for trying to kill members of the U.S. military in Afghanistan, has drawn public attention. Federal prosecutors allege that she was a member of Al-Qaeda, charges her supporters deny. Her case has become an international cause célèbre among some, with groups formed to petition for her release, claiming her to be “innocent” and Pakistani government officials, including Pakistani prime minister Imran Khan, claiming occasionally that they will try to get her released from prison.

Siddiqui’s case and her status at the top of the list of “Muslim female prisoners” held in the jails of “the Crusaders” has remained since her arrest, trial, and imprisonment a regular feature of Sunni jihadi rhetoric and narrative construction. Both Al-Qaeda and Islamic State (ISIS/ISIL/IS) and affiliated and allied organizations have demanded her release and attempted to rally the support of Muslims by invoking her name and the names of other “Muslim prisoners.” This is particularly true of Muslim women prisoners, the “honor” of whom Sunni jihadis claim to be avenging when they carry out, or try to carry out, attacks. Siddiqui and other women prisoners (as a general rhetorical group) have and continue to be regularly named as motivations by a host of jihadi ideologues, leaders, and organizations including Al-Qaeda Central’s amir, Ayman al-Zawahiri, Al-Qaeda in the Arabian Peninsula (AQAP), Al-Qaeda in the Indian Subcontinent (AQIS), Al-Shabab (Al-Shabaab) and its foreign fighters, and the Tehrik-i Taliban Pakistan (TTP). Jihadi commanders have also proven adept at using the issue of real and reported/perceived abuses of Muslim women, including prisoners, as a tool to re-socialize their followers to accept higher and more egregious types and levels of violence.

This post highlights just a handful of jihadi media and rhetorical narratives about Siddiqui specifically.

(Above): Lyrics from a particularly bad “rap” by the late Omar Hammami concerning Aafia Siddiqui and other Muslim women prisoners. The Haqqani Network, in addition to being one of the most capable armed factions within the “Quetta Shura” Afghan Taliban, is also adept at media/information operations and branding. Here in photographs and images from Haqqani communal da’wa events in 2018 and 2019 the logo of the group’s media outlet, Manba’ al-Jihad (Fountainhead of Jihad), can be seen on print-outs, banners, vests of its media operatives and fighters, and even plastic bags for books, pamphlets, pens, mp3 files, and even medicine (Panadol, a brand of Acetaminophen).

On the history of the Haqqani Network and the important role of its Afghan-Pakistan founder, the multilingual Jalaluddin Haqqani, see the excellent book Fountainhead of Jihad: The Haqqani Nexus, 1973-2012 (Oxford University Press) by Vahid Brown & Don Rassler.

The image of the horse (faras) and the horseman (faris) is a central and frequent symbol used in a variety of jihadi culture(s) across different ethno-nationalist groups including Arab, Pashtun, Central Asian, and African organizations. Portraying modern day insurgents and other militants as the contemporary “knight” (faris) and chivalric warrior, the individual defending Islam and the Umma from occupation and persecution by non-Muslim forces and their “apostate” allies, these groups draw upon longstanding sociocultural and historical symbols and motifs, reshaping them into new narrative frames that seek to link today’s militants with idealized figures from the past, in particular the earliest Muslims led by the Prophet Muhammad and his successors, the four “Rightly Guided” (Rashidun) caliphs and the first three generations of Muslims, the Sahaba (Companions), the Tabi’un (successors), and the Tabi al-Tabi’in (successors of the successors). These early generations of Muslims are heralded as the paramount examples of piety, faith, and religious action, the model for all subsequent generations of believers to emulate.

In historico-military terms, these three generations expanded the earliest Arab Muslim states outward from the birthplace of Islam, the Arabian Peninsula, into the Levant, Egypt and North Africa, Anatolia, Iran and Central Asia, Sindh and the Indian Subcontinent, and further afield into Asia, Sub-Saharan Africa, and southern Europe. For today’s jihadis this “golden age” has been idealized in a way to focus centrally on military struggle (jihad al-‘askari) in what most see as the “defense” of the Umma and Islam from external aggression and internal betrayal and perfidy. This purity of intention (niyya) to “strive in the path of God” (jihad fi sabil Allah) is exemplified in the chivalric horseman, the knights of faith (or, as the former Islamic State of Iraq dubbed them, the “knights of martyrdom,” fursan al-shahahda) who are the closest embodiment in the modern age of the Prophet’s generation.

The horse as a symbol plays a central role in pre-Islamic and classical Arabic literature with the term “faras” (referring, in general, to thoroughbred horse; plural: frāsāt) appearing in classical poetry (such as the qasidas of the famous sixth century poet Imru’ al-Qays) as an image of beauty, chivalry, and a symbol and celebration of the skilled horseman and the symbolic nobility of the animals themselves.

Horses are mentioned in the relation to their beauty (3:14) and creation by God for humankind (16:8) as well as throughout the hadith literature. In one hadith the Prophet is said to have said, “There is always goodness in horses” and in others horses are referred to as mounts, in warfare, as food, in racing competitions, and as exempt from zakat.

The horse, central as it was to the early Arab Muslim territorial expansion, was mythologized in early Islamic literature and training manuals (furusiyya) were also developed concerning the animals’ usefulness as cavalry mounts. As the early Muslim states expanded they came into contact with other military equestrian traditions, chiefly that of the Iranians, Central Asian Turks, and the Byzantines and led to interbreeding between the different stocks of horses. In the modern day, mechanized jihadi forces are compared to the fursan of old, often by referencing Qur’an 8:60: “”And prepare against them whatever you can of power and of steeds of war by which you may terrify the enemy of God…”

Skilled horseman on the battlefield, often with banners flying and weapons raised high, the sword and saber of old replaced in jihadi motifs often with rifles and other firearms, appear throughout the media and visual cultures of today’s different jihadi (or, to use their term, mujahidin) groups including the Afghan and Pakistani Talibans, Al-Qaeda Central, Al-Shabab, and Islamic State. Images of the horse cross sectarian boundaries and often appear in Twelver Shi’i religious artwork and the visual culture of modern day Shi’i armed groups in reference both to the Prophet and to the horse, Zuljanah, of the third Imam, Husayn bin ‘Ali. Zuljanah, the martyred Imam’s faithful mount, is linked to the Prophet, who was bought and raised by Muhammad and was later given to Husayn. A white horse, standing as Zuljanah, is central in many contemporary Muharram mourning rituals and processions, particularly in South Asian Shi’i communities as well as in their diasporas.

Below are a number of photographs and visual motifs of horses in contemporary jihadi culture(s) as well as selected segments from audiovisual releases with brief annotation. Due to space and time constraints, the below is, of course, not exhaustive; there are numerous groups using or that have used equestrian (and dromedary) imagery:

(1) The Encyclopaedia of Islam, 2nd Edition, in particular the articles on “Faras” and “Furusiyya.”

(3) “The Horse in Arabia and the Arabian Horse: Origins, Myths and Realities” (Jérémie Schiettecatte and Abbès Zouache; Arabian Humanities 8, 2017): https://journals.openedition.org/cy/3280?lang=en

(9) “Refighting the Past in the Present: Modern Conflicts and the Mobilizing and Contesting of Sacred History” (my own short piece at Maydan; 17 November 2016): https://www.themaydan.com/2016/11/refighting-past-present-modern-conflicts-mobilizing-contesting-sacred-history/ 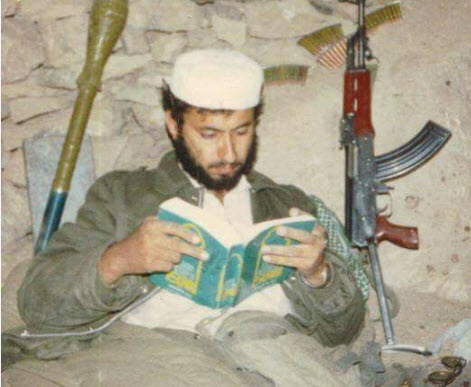 South Asian Sunni jihadis are marking the 12th anniversary of the July 3-11, 2007 siege of the Lal Masjid (Red Mosque) in Islamabad by Pakistani government forces, which were responding to increasing violent activism by male and female students at the mosque’s two schools including its now famous women’s madrasa, Jami’a Hafsa. These groups include pro-Al-Qaeda and Islamic State militants as well as Pakistan and Kashmir-centered groups including the sectarian Lashkar-e Jhangvi.

The mosque’s deputy imam, ‘Abdul Rashid Ghazi, who was killed during the siege, became a central “martyr” figure in Sunni jihadi visual and literary cultures, particularly but not only to South Asian groups. Different factions of the Tehrik-i Taliban Pakistan, the Islamic Movement of Uzbekistan, and the Islamic Jihad Union have named military attacks or campaigns and special units after him or in memory of the scores of students and others killed during the siege by government forces. Ghazi and the other martyrs were eulogized by Al-Qaeda Central (AQC) and other major jihadi groups and figures, with Ayman al-Zawahiri and the late AQC leader Abu Yahya al-Libi placing him in the pantheon of the “mujahid ‘ulama” who, they said, are exemplary figures for the Umma.

The 189th issue of Islamic State’s weekly Al-Naba newsletter included an interesting and detailed profile highlighting the importance of individuals with formal religious studies expertise. They are particularly important for the militant organization and its regional affiliates and branches due to their often lack of many credentialed, highly educated religious scholars.

The article highlights one of Wilayat Khurasan’s “shining” religious scholars (‘ulama) & late wali (governor), Abu ‘Umayr ‘Abd al-Hasib al-Logari, who ascended to the top of Wilayat Khurasan after the July 2016 drone killing of Hafiz Sa’id Khan, heralding the former’s leadership during “one of the most difficult periods” for the “Province.” Wilayat Khurasan is the Afghanistan branch/affiliate of IS’ core organization. It maintains connections with the core while also having its own set of local and regional dynamics and interests. ‘Abd al-Hasib is referred to as a hadith scholar (muhaddith).

After completing his studies, he decided to travel to Afghanistan to join the battle against “polytheism” (shirk) & “Sufism” (tasawwuf), spreading the “true” message of absolute monotheism (Tawhid).

He taught shari’a & fiqh for two years as member of the Afghan Taliban before leaving with defectors & TTP commanders who accused their rivals of being linked to the “apostate” Pakistani government, serving as a deputy to founding wali, Hafiz Sa’id Khan.

As Khurasan wali, ‘Abd al-Hasib he participated in fighting the “Crusaders” on the frontlines of Nangarhar in ribat & established the proto-state governing offices (dawawin, diwans) of the Wilayat.

Despite his leadership duties, he also continued his role of religious teaching & preaching, spreading “Tawhid” & the “loyalty & disavowal” (al-wala min al-mu’minin wa-l-bara ‘an al-kafirin) among locals. He died in battle against U.S. forces on April 27, 2017.